Vayu and the black panther surrounded me as I stood under the starry sky watching the little lights. For the first time in months I felt their presence so clearly, that I could recognize their shapes visually as their thought-forms condensed in my physical vicinity. Some small creature stirred some leaves on the ground beneath the tree under the balcony. Very interested, the black panther jumped up with a telepathic remark of stating that she was in hunting mood. And off she was.
The snow leopard looked at me, beckoning, with his wise blue eyes, his tail twitching and I longed to run with him again. Leaving the body was so easy even though I wasn't drumming, as Vayu was there beside me, radiating love, and as soon as I embraced him around the neck he pulled me out and we ran across the night sky. The amazing sensation of the transformation from a humanoid shape into the furry appearance of a leopard took over my being and I enjoyed how the thought feels of running.
"It is time that we take this a step further", Vayu said when we came to a halt somewhere. there was a landscape below us, miles away, a city was there sparkling in the night and I could see the line of gray starting to turn into color that sang of sunrise far away. A little while later we descended towards now sun-lit mountains covered in snow. A small thought found its way into my awareness, 'I must be on the other side of the planet'.
Vayu told me to follow him and the surroundings in my vision changed immediately and it was blurry. I felt myself becoming more dense and a question was formed in my mind: 'may I enter you?'. The answer was a pulling, i was pulled inside a being that felt so young and vibrant and his paws felt cold due to the frost on the small tree's branch he was standing on, more cowering, as he/I smelled the air. Clearly we distinguished the scent to be that of a mountain goat, there were two of them beneath us. We eyed one of them, it had nasty horns and nasty hooves our mother had taught us to avoid when sending us on our first hunt. Its flanks looked soft and promised tender flesh beneath the marked fur, we felt water in our mouth and the tension tightening our limbs. We had to be cunning, to jump the right distance so we could grab it by its neck, and quick and strong to end its life swiftly. It was eating twigs from a bush while we prepared, our intention to jump reaching out in front of us. The other goat we didn't focus on made a few nervous steps away from us, would the one we wanted to catch be alarmed too? No, it stayed there, calmly, even turning slightly in an angle so we could reach it even better. Mother had told us, that when the intention is clear enough and the prey aligns with it, this would happen. All these thoughts were there in a flicker of the blink of an eye and still we were so focused and present. All there was was this goat, the tree and this slender body waiting to leap forward. Then we jumped. Our sharp teeth sank into the softness of the goat's neck, a sharp pain jolted through our left hind foot where we were hit by its attempt to shake us off, and simultaneously the slightly metallic taste of warm blood pulsated onto our tongue, filled our mouth. We bit harder, tugging at it so to break the creature's spine, with the pranks we held it like in an embrace. A deadly embrace that would leave us triumphant and thankful for the food in the belly he would feel later that day.
"I want to run, this one was hunting his prey, snow leopards hunt from ambush not from chasing", I told Vayu as soon as I parted from the leopard's perspective and thanked him for the experience. So we traveled on, up north, to a mountain range that wasn't as high and when i entered this leopard's perspective, it was significantly warmer. She felt desperate though. She had been running for days now, it was not the running she liked, not the running for its own sake, for enjoyment, but this time she was running from something. Humans had been there, she had fled. And now on this plane we felt the presence of something coming near. Could be another leopard, of course we had left our own territory... If it was a male, we wouldn't stand a chance in a fight, we hadn't eaten in a while. We took a deep breath with our exhausted lungs, to catch the scent. Yes, definitely a male leopard. Let's run on. So we ran. In the running the despair faded away and she almost felt like she was running for the sake of running.
I had enough for this journey. I followed the silver chord back and settled into the comfortable familiarity of the human body lying in my bed.
Posted by dancing soul from vayuna at 15:02 No comments:

Where do i start? It is about one of these "coincidences" when everything makes sense in the end where every single piece fits tightly together to the one experiencing it - me - and probably is just a mixture of random occurrences to everyone else.
And this time it needs a little bit of looking back into the past.

Inanna came to tell, that my Spirit Totem had fulfilled another cycle and was to burn out and be hatched anew. She had another name back then, her feathers brightly golden, yellow and orange, on her head curved horns had grown as she had picked up the vibration of the mighty thunderbirds who had hatched her last time. Now I saw her extinguished, the light fading, her name fading, and she was gone, leaving me to explore further the depths of my shadows.
When she came back, fresh and bright, the name that fit that Phoenix being that took the attributes of a white swan in this turn was again a Sanskrit word. I have no idea how it comes I know Sanskrit but deep down I can access it and maybe that is to be revealed to my awareness too in time.
Anyway, a week later after Satya's return, I did a significant Tarot reading with the Mary-El Tarot. Never before was the theme for the time to come so obvious to me: transcending polarity. Every single card spoke of polarities, if not in itself, then in an aspect with other ones. The Hierophant in the end, as the beacon of what I am to become in this next life-cycle, a being that transcends polarity in itself and nourishes both opposites inside. The ultimate embodiment of the AND-consciousness.
The spread is called "Inanna's descent into the underworld": 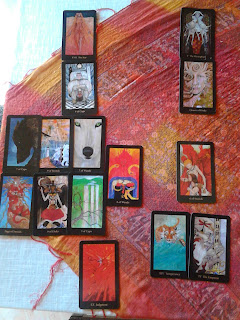 Well, the weeks passed, I lived my life, enjoyed the sun, I built a shamanic drum, I had a visitor from Germany for a holiday, I prepared awesome food and observed the butterflies I had manifested by occupying my mind with gathering thoughts of them and tried to decide whether I should start Qi-Gong or Yoga once I get more money in two or three months...
...when I had a dream one morning this week. I met Inanna and Asket in a café and we discussed book recommendations. Inanna said, "Advaita, that is an awesome thing, go read that!", and then I woke up. Of course I knew the word meant something like "about non-duality", it is obvious when you grew up with a Slavic language that developed directly from Sanskrit. But when I googled it, how surprised I was to learn that besides the fact that Advaita Vedanta is a Vedic school based on the Upanishads, the Bhagavad gita and the Brahma-Sutra that states that Atman (personal higher Self) is identical with Brahman (pure divine Essence) and thus all is One and non-dual, the Advaita uses the symbol of a swan.

"An artistic rendering of a swan, with the Sanskrit sentence Brahmaiva satyam - Brahman is the only Truth. The greatest masters in the advaita tradition are called paramahamsas - the great swans. The word hamsa is a variation of so'ham: I am He, which constitutes the highest realization. There are other equivalences between the swan and the advaitin, that make the swan a particularly apt symbol for advaita vedAnta. The swan stays in water, but its feathers remain dry. Similarly, the advaitin lives in the world, yet strives to remain unaffected by life's ups and downs."
from Advaita Vedanta

So then I wanted to know, what does an advaitin practice to reach the goal of liberation? Is there an Advaita Yoga or do they use other traditions? And I came across... Here goes the drumroll... Jnana Yoga! Before I bore you with that, here's the link to Jnana Yoga

Well now, you'll probably see what I'll be doing for a while now, and i guess, Yoga has won over Qi-Gong :D
Posted by dancing soul from vayuna at 09:30 No comments:

dancing soul from vayuna
Hi, my name is Lilia and I welcome anyone who finds themselves on these pages! This blog is probably going to be a chaotic and random recollection of what I experience, mostly in some way or the other spiritual, philosophical or artistic in nature. Feel free to comment!